With the Lakers going to miss the NBA Playoffs it’s clear that the LeBron James signing hasn’t been a slam dunk for the Los Angeles Lakers. However, with what has happened to this team this season I bring up a bold strategy for the Lakers…trading LeBron. On this episode I highlight all the reasons why the Lakers should trade LeBron James and why it makes sense for both parties.

It’s been a rough year for the Los Angeles Lakers and LeBron James. After eight straight NBA Finals appearances LeBron is on the verge of missing the playoffs entirely. On this episode I break down why LeBron’s move to Los Angeles can serve as a warning for future NBA stars in free agency.

The LeBron process has begun in Los Angeles. You may be asking what process? I break down how LeBron has a process for every single season and how the Lakers are already getting into stage two of the three stage LeBron regular season process. Don’t believe me? I break it all down on this episode. Make sure to like, subscribe, and email your questions to RichSportsTalk@gmail.com.

Everyone assumes that Lebron James is the one holding up the NBA free agency period. It’s an easy association. He is the best player in the world, and when he makes his free agency decision then the rest of the free agency dominos will fall. There is no question that whatever James decides will create a ripple affect across the NBA, however he may not be the one who has the biggest impact on free agency.

What if I told you that Chris Bosh is the key X factor for NBA free agency? Truth is that his decision would have a greater impact because it impact’s Lebron James’ decision. After opting opt of his contract, the consensus was that the Heat wanted to pay Bosh around 11 million dollars per year, a huge pay cut from last year. Now the Houston Rockets are reportedly offering Bosh a max contract worth reportedly 88 million dollars over four years. If Bosh decides to go to Houston to not only get paid but to also be a member of a title contending team, it would impact the entire league.

Let’s say Bosh goes to Houston. There are even reports that Pat Reiley has been pushing Bosh towards Houston encouraging him to take the money. That would open cap space in Miami for the Heat to get Carmelo Anthony. Lebron has been saying that the dream is to play with Melo and if Bosh leaves that would open up the cap space for Melo to play in South Beach.

That might not be the only scenario. If Lebron feels that Miami has lost too much with the loss of Bosh he may go back to Celeveland or sign a one year dear to see what the market is next year. Don’t forget that Melo may stay in New York for a max deal or that he may want to go to LA. An intriguing possibility is if James takes a one year deal in Miami to see how New York plays out. 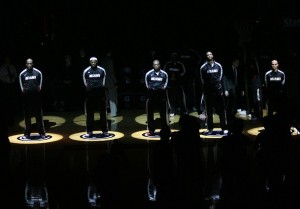 Can anyone knock the Heat off their throne

“This fall I’m going to take my talents to South Beach and join the Miami Heat”. When Lebron James uttered these words in front of a surprised nation, a new villain had been spawned. “The Big Three” of Lebron James, Dwayne Wade, and Chris Bosh became the new villains of basketball. Much like the movie Star Wars, this evil empire is led by three NBA juggernauts who for the past three years have bullied the NBA’s best. In those three years the Heat have won two championships and have been in the finals every single year. Now the question is can anyone take down the empire? While it remains to be seen if Chris Bosh will return, there is no question that the Heat will be the favorites to three peat. The thing is that there aren’t many eminent threats to this evil empire’s reign. The Pacers and Bulls represent the biggest threats with their deep pools of talent. However, the Bulls will need Derrick Rose back and healthy if they want to beat Miami. If healthy I think that the Bulls could be the team that is the biggest threat in the East. That is if they can stay healthy. What about the Pacers? While the Pacers have a talented roster and a physical style of play that can exploit the Heats, I think Miami will do two things to prevent this. First I think they will not underestimate the Pacers again, and second I think that the Heat will add a physical big to help counter the physical in the paint style of the Pacers. The only other team that could compete with the Heat would be if the Celtics can reload their roster with young talent while removing the original big three of Garnett and Pierce. What about the West? While Kevin Durant’s Thunder pose the biggest threat it was apparent this postseason that he still needs help around him. The LA teams? The Lakers and Clippers are both messes right now, with the only exception being that the Clippers are a glorified highlight reel. The Spurs? Unfortunately I think this was the last hoorah for Parker and Duncan as father time becomes their biggest challenger. While there may not be an immediate end to the Heat’s reign, the one thing that all other NBA fans have is hope. They hope that their team, or some other team will rise from the NBA depths and overthrow the Heat’s empire for good.