This pick has seemingly been locked for a long time. Winston has been the consensus top quarterback in the class and has been almost locked as the top pick for months. Barring some trade or a bold decision, it looks like Winston will be a Buccaneer. It makes too much sense. Tampa Bay has been desperate fort a franchise quarterback for years, Winston is from the Tampa area, the small market could help the media exposure around Winston, and Tampa has some great weapons on offense. With the state of the NFC South, it’s not that far-fetched that if Winston can play well from day one, the Buccaneers could compete for the division title. 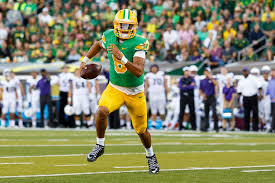 The biggest question about this year’s draft will be where will Mariota go? Will he be drafted high or fall? Will a team trade up for him? Which team could trade for him? In this scenario I have Tennessee grabbing him here for one of two reasons. First, they need a franchise quarterback and Zach Mettenberger is probably not the answer. The other reason he could go here is that Tennessee could play the leverage game and try to trade him for more draft picks. Either way Mariota will probably be off the board sooner than later.

Every year quarterbacks go earlier in the draft then projected. It is a quarterback driven lead after all and teams will be aggressive to get a quarterback before they come off the board. With two first round picks, the Browns have the luxury to use one of the picks on a quarterback while still getting a talented player with the other. I have Petty going with the later pick. Cleveland has made it clear that they are no longer sold on Manziel and Petty has the type of character make up a franchise would want at quarterback. Petty will need some time to sit and learn the playbook and with Josh McCown now on the Browns it has made it the perfect situation for Petty to sit and learn rather than playing right away. It also could give Cleveland the excuse to move on from Manziel. 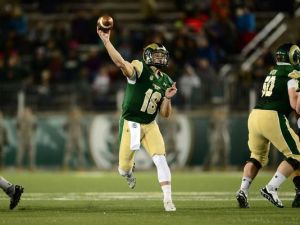 The Washington Redskins could be looking to move on from Robert Griffin III. However, they probably will not want to use a first round pick on a quarterback even if Mariota is available. In the second round Washington could take a shot on Garrett Grayson who has been battling Hundley and Petty to be the third quarterback off the board. Grayson has the size and enough arm talent to possibly be a future franchise quarterback in the NFL. While Griffin has more physical talent, the problems with his leadership and durability will have Washington looking for a possible replacement plan.

Despite three different quarterbacks in 2014, the Arizona Cardinals were able to make the playoffs. However, with Carson Palmer’s health now a question mark the team needs a solid backup plan. Hundley could be the future starter in Arizona, and could be groomed in the meantime under Palmer. Arizona has the defense to be a contender but they will need a quarterback to get there. Hundley could be that option if Palmer is hurt again and Hundley’s skill set is perfect for not only this team but this division. With a division with great defenses and pass rushers, a mobile quarterback in the pocket is crucial. There’s a reason the NFC West has two of the most mobile quarterbacks in the league, it’s because this division has great defenses. Arizona needs a quarterback to get back to the postseason and Hundley is a great security blanket should Palmer get hurt again.

Where will Mariota go? This has been the biggest question when it comes to the 2015 NFL Draft. At the moment, it is assumed that Florida State’s Jameis Winston will be drafted with the first overall pick. After that, the picture gets very murky.

Could the Titans draft Mariota? While the team does have Zach Mettenberger primed to take over the starting role, the Titans may feel that Mariota has more upside and better mobility to make up for Tennessee’s shaky offensive line then Mettenberger.

What about the Redskins? The Robert Griffin saga could be reaching its conclusion with Griffin’s option for next season counting for $16 Million  against the cap. The organization may decide that the once emerging star and rookie of the year has overstayed his welcome in the nation’s capital.

The Jets? Even though the Jets front office has been adamant that it will continue to try to develop Geno Smith, head coach Todd Bowles has said that the Jets will look to address the quarterback position in the draft. New York hasn’t had a franchise signal caller since Joe Namath and could feel that Mariota is their future franchise quarterback.

Even beyond those teams there has been numerous speculations especially that Chip Kelly’s Philadelphia Eagles, who have been wheeling and dealing all offseason, will try to move up to take Mariota even though Kelly denies this possible option. However, there is one team that people aren’t talking about who could be in the sweepstakes for Mariota’s services and has the ammunition to go up and get the quarterback. That team is…

The Cleveland Browns. Scratching your head? Let me explain. Despite the poor play at quarterback last season Cleveland finished with a 7-9 record and had a chance to make the playoffs. Cleveland is desperate for a franchise quarterback and thought that they might have found one in last year’s draft. Unfortunately, Johnny Football is now Johnny Rehab as last year’s first round pick has careened out of control.  While Cleveland still has holes at the wide receiver and tight end, the most glaring is quarterback.

While the Browns have signed Josh McCown

he is a stop-gap at best at this point in his career. The team has no idea when Manziel will be back and more importantly if he can play in the NFL. Cleveland needs a franchise quarterback to build around and has something no other team has, two first round picks.

Cleveland could trade both picks, or move one pick will keeping the other first round pick this year in a package deal to move up and grab Mariota. If they elect to keep a first rounder this year, and presumably give up high future picks, the team could use that pick to give Mariota a play maker. Would Mariota make the Browns a contender over night? Probably not, but Cleveland is in a better spot then people think.

Despite their tough division and poor quarterback play last season the team finished with a decent record. Mike Pettine has a solid running game and an underrated defense. Like Rex Ryan, we know that Pettine’s square will have a formidable defense. If Mariota can come in and make plays then the Browns could make a run at a division title as soon as next year.

Will this happen? It’s anyone’s guess. While it would make sense for Cleveland to move up, they may feel there are better quarterback options later in the draft or they still, I don’t see how, but still have faith in Johnny Manziel. Either way, don’t be surprised if a franchise that’s been desperate for a franchise quarterback decides to pull the trigger and move up for Mariota.

One thing we do know. It’s going to be an interesting draft because Mariota could go anywhere. 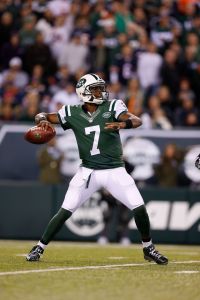 It’s a saying that has been used to describe the New York Jets 2014 season almost as much as “interception by Geno Smith”. That phrase is “the Jets have hit rock bottom”.

Here they are again! After being embarrassed for the second time this season by the Buffalo Bills in a 38-3 drubbing at Ford Field in Detroit on Monday Night Football, the 2-9 Jets have officially hit rock bottom. They’ve lost their best player to injury in Muhammad Wilkerson and had to turn from struggling veteran starter Michael Vick back to the incumbent Geno Smith. With five games left in this regrettable and lost season, the Jets should just let Geno Smith start the final games.

It’s pretty much a foregone conclusion that Rex Ryan will be gone after the season and the organization is due for a major overhaul. With these last five games basically being a tryout for next years squad it just makes sense to start Smith. After sitting on the bench for a few weeks and realizing that his time with the Jets is now in the eleventh hour, Smith needs to play well over the final five games to prove that he should be in the mix for the starting job in 2015.

With the Jets seemingly on their way to a top five pick in the 2015 NFL Draft, if Smith wants to have any shot in New York next season he needs to finish the season with an exclamation point rather then a question mark. As the Jets starter smith has guided New York to a 9-15 record while throwing 19 touchdowns to 31 interceptions. Not exactly the numbers a team wants from their so-called franchise quarterback.

If Smith wants any shot with the Jets, or in the NFL in the long-run, he needs to go from game manager to playmaker. If he can throw and run for touchdowns while eliminating the costly mistakes that he has become well-known for, he might have a shot in the NFL.

Don’t get me wrong, Smith has great physical tools including a plus arm and great feet, but it’s the mental side of the game that worries me. This has been well documented this season whether he’s late for a meeting, or pouting on the sidelines, Geno Smith needs to prove over the final five games that he is a leader and takes being the general of the offense seriously.

It’s a long shot to think that the Jets won’t address the quarterback position this offseason, but in the present they need to evaluate Smith. While many of the offensive woes can be placed on Smith, people must realize that the entire roster is a mess.

Outside of the lack of weapons on the offensive side of the ball, the Jets offensive line outside of Pro Bowl center Nick Mangold has been a disaster. Then of course is the defense which has cornerbacks that probably shouldn’t be on an NFL roster let alone starting for the team and New York’s first round pick Calvin Pryor who has played so bad that the team has benched him.

The Jets are a disaster. There’s no way around that. However, with the plethora of problems on both sides of the ball and in the front office, ifGeno Smith can show some signs at life, it could give the organization a year to build up the rest of the roster around Smith and then make a decision on what to do at quarterback next year.

Is Geno Smith’s replacement in the 2015 NFL Draft? Could Mariota or Winston be the next QB for the Jets?

However, if Smith plays like he has throughout his first 24 starts, then the Jets scouts will once again be looking for a quarterback at the combine for the third time in six years. Do I hear the Marcus Mariota and Jameis Winston Jets rumors off in the distance?