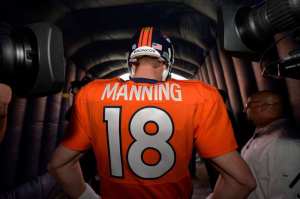 If Peyton Manning wins should he retire?

It was a season to remember. With fifty-five touchdowns and over five thousand passing yards, Peyton Manning crafted the most masterful season in NFL history. Many experts may say this is the best that Manning has ever been, the pinnacle of Mount Everest for the quarterback position. Now only one win away from a Super Bowl and football immortality, the question is if Peyton Manning hoists the Lombardi Trophy, should this be it?

At the age of 38, Peyton Manning isn’t exactly a spring chicken. True he probably could continue to play a few more seasons given the lack of punishment he has endured being hit as a quarterback. Still, there is one important aspect that tends to get overlooked. Peyton Manning’s neck is a cause for concern. Two years after major neck surgery, Manning has already said that he will visit doctor’s this offseason to see how much his neck has deteriorated. If Manning wins this Super Bowl, and the doctor’s tell him that his neck has deteriorated significantly, then I think he will strongly consider retirement. He will have finally won multiple Super Bowls, and a Super Bowl for two different franchises. This is a feat that has never been done before. Plus, would another Super Bowl really mean that much? He’s in an elite club with only a few quarterbacks that have won multiple Super Bowls. Add in his regular season success, Manning would have to be considered one of if not the greatest quarterback in NFL history.

What would be a more fitting end to Manning’s career then a Super Bowl victory? If he loses this sunday I have no doubts that he will be back under center, even with the health concerns. He needs one more Super Bowl victory. Let’s say they win this Super Bowl and he comes back. What if he gets hurt next season and can’t play again? What if he can’t win another Super Bowl? Wouldn’t it be better if Manning if Manning left in the prime of his career rather than limp out pathetically at the end? While many football fans want to see Manning continue his career, me included, there is a time where even the greats have to make the difficult decision to retire. Don’t be surprised if the Broncos win the Super Bowl, that Peyton Manning may not be under center for them in 2014.

One thought on “Last Hoorah: Should this be it for Peyton Manning?”