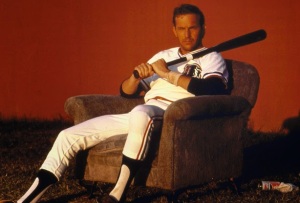 What were your glory days? The days when everything in your life was perfect and your life’s dream was fulfilled. How does one measure these days of bliss? In weeks? Months? Hours? For one man it was days, 21 days to be exact.

For 21 days life was perfect for Crash Davis. For those three weeks Davis, whose lifelong passion was the game of baseball was in the major leagues. Playing on emerald green diamonds in front of 40,000 fans under the lights of prime time. Then, just as quickly as his dream was realized, it was over.

Crash Davis is a legend, just not the one you hear about. In the pantheon of baseball lore the names of the greats like Ruth, Gehrig, Mayes, Aaron, Robinson, and C.Y. Young have become to american society super natural beings such as the gods and ancient heroes of Greece. For Davis, he is not one of these iconic figures, but rather a man whose journey could be appropriately described as a greek tragedy.

For 12 years Davis was a minor league player, the baseball purgatory where players are either trying to find a way to the majors, and veterans are desperately trying to claw their way back. Still, Crash’s legacy among the baseball misfits is considered the greatest. Davis was in the record books with 432 career minor league home runs the most in minor league history. A record that stood until August 2015 when Mike Hessman, another career minor leaguer, launched his 433rd home run toppling Crash’s record which stood for almost thirty years.

Despite his offensive records and his immeasurable gift for helping players in the minors he helped make the jump into the show, Davis just couldn’t crack the big leagues again. “I was always the player to be named later” Davis told me. “I knew how things worked and that I was just a piece that helped to finish a trade. The kinda guy that would help move their prized horses through the system, but not a guy who would help them in the bigs”.

Now years after hanging up his shin guards and catcher’s mitt, he is one again in baseball’s purgatory. Now the manager Mobile BayBears, the Double A affiliate of the Arizona Diamondbacks, Crash is nurturing the next generation of baseball players.  Once again he is a leader of a team, this time just not squatting behind the plate.

“It’s a challenge but I help the guys I can. It’s tough though. There are guys like me who have the all the smarts but not the talent to make it, and the players with all the talent in the world but can’t hold a thought in their head.

After all my years I found that the ones who have a bit a of both usually make it. Baseball is cruel though because you do see the guys that god gave a thunderbolt arm and who piss their talent away squeak through with talent, while guys like me are screwed because they’re not talented enough despite knowing the actual game. But that’s just how it’s always worked”.

When I asked what he thinks is the most important thing that Davis can influence the guys in he says it’s all about their communication with the media.

“At this point you can tweak or put the finishing touches on guys but they are what they are. I tell them to give simple cliche answers when interviewed or on social media. It’s boring but their attitude on the field is not what people want to hear”.

Me: “What attitude do you mean Crash”?

Davis: ” You gotta be cocky and arrogant. Even when you’re getting killed out their you gotta play this game with fear and arrogance.”

Me: “You mean fear and ignorance”?

Davis: “No you hayseed. Arrogance. You gotta walk around like you’re the best goddamn player on the planet. You gotta fear that players and our own limitations, but when you step between those lines you let everyone know that your their best and you’re not intimidated by anyone”.

Like his playing career before Crash is helping countless minor leaguers get their chance to play under the bright lights of the major leagues. And like his playing days he is still waiting for the call that tells him he is back in the show. Still, when people talk about Crash Davis, or his name flows to the top of baseball conversation he won’t be known for what he could do as a major league manager.

Instead it’s his minor league odyssey. How he continued to take buses and live the grueling life of a minor league player even after he knew he had no chance to be back in the bigs. But for Crash it was never about the money, the fame, the glory, and even to play in the majors for a long time. Why did he play baseball? For the love of the game.