Andre Roussimoff better know as “Andre the Giant” has become a legend in the wrestling community. However, one of his biggest impacts has been on Hollywood.

Andre the Giant. Those three simple words conjure up the almost mythological legend that the professional wrestler has become in common folklore. It’s been over two decades since Andre Roussimoff passed away, but the stories about his life have become legends in their own right. 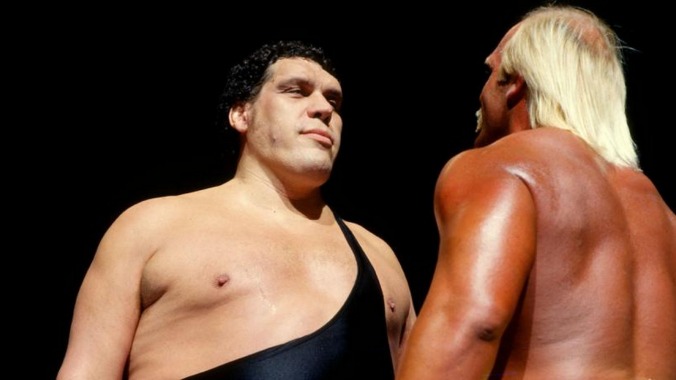 Many remember Andre putting professional wrestling on the map and kickstarting the WWF/WWE into what is now a billion dollar industry. There is no question about his impact of on the wrestling industry. He was the industry’s first bankable star and was the turning point for wrestling becoming local promotions to a billion dollar industry. During the 70’s and 80’s Andre was arguably the world’s most recognizable sports icon and had arguably the most seminal match in wrestling history at Wrestlemania 3 where he put over the sport’s  biggest rising star, Hulk Hogan.

His feats of strength in the ring are second in legend only to the stories about his drinking. Andre is recognized as the greatest drinker of all-time with hundreds of stories about the man’s capacity for drink. Still, one thing that he isn’t recognized for is his impact on the current Hollywood landscape.

Dwayne “The Rock” Johnson has become one of the biggest and most influential stars on the planet after starting his career in the WWE.

This past week Dwayne the Rock Johnson’s latest movie, Rampage, was number one at the box office. Today, Johnson is one of, if not the most recognized actor on the planet. His movies have brought in billions of dollars with Johnson consistently being one of the best movie draws of the past decade. Not to be outdone, John Cena has also been making an impact in multiple films in recent years and Dave Batista has played multiple roles in Hollywood and found a home in the Marvel Cinematic Universe as the character Drax.

With the Rock being one of the biggest stars of the planet and other wrestlers making their mark in the entertainment industry, it’s important to remember the Andre was the wrestler who allowed wrestlers to make the move to the big screen. True, Hulk Hogan did have a guest appearance in Rocky III but his role was a brief cameo that while enjoyable, wasn’t a huge part of the movie’s plot.

Andre was the first wrestler to appear in multiple movies starting in 1976 as he played the role of Sasquatch in The Six Million Dollar Man.  In an age without special effects, he was the only person who could play the role. Many people don’t know is that for the next decade he would have multiple roles in both television and film. Even with all of these credits it wasn’t until the most pivotal for Andre as the giant Fezzik in The Princess Pride that he would truly open the door to acting for his fellow wrestlers.

Andre’s first role was as the Sasquatch in The Six Million Dollar Man in 1976.

Not only was this the first role in a major successful motion picture for a wrestler, and established that professional wrestlers could have pivotal roles in a movie. The film is one of the most beloved fairytale stories of all-time and has been inducted into the National Film Registry. In fact, the author of the Princess Bride Novel based the character of Fezzik on Andre the Giant. It was the perfect role for a real life gentle giant and even though Andre had trouble physically doing the movie due to chronic back problems, he was still able to pull of a memorable performance.

Andre’s role in the Princess Bride as the gentle giant was not only crucial to the film, but for future wrestlers making an impact in Hollywood

His pivotal role in the film as the gentle giant, not only cemented Andre in one of the most memorable movies, but more importantly proved that professional wrestlers had the ability with their entertainment background could have exceptional performances on the silver screen.  One of the biggest what ifs would be what if he didn’t play the role in the movie? His back was so bad that he couldn’t hold Robin Wright’s character Buttercup in the film. In fact cables were used to help Andre in the scenes where he had to carry things and he had a stunt double in the famous fight scene when Cary Elwes jumps on the giant’s back. Despite these setbacks, he was able to complete the roll and more importantly open the doors for wrestlers in Hollywood.

Without his role in  Princess Bride, professional wrestlers might not have gotten the opportunities to star in films. Can you imagine Hollywood today without Dwayne Johnson or the Marvel cinematic universe without Dave Batista as Drax?

Wrestlers have become invaluable assets in entertainment outside the ring. However, they might not have had this opportunity without Andre Roussimoff’s crucial early contributions and by his standout role in one of the most beloved movies in the past 40 years.