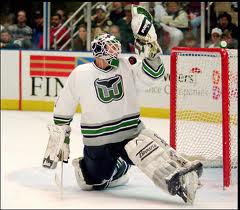 Hartford has been without hockey since 1997

April 13, 1997 is a date that probably doesn’t mean much to you. Just another day that passed on the calendar without anything significant occurring. However, this was a day that would live in Connecticut infamy. After defeating the Tampa Bay Lightning  by a score of 2-1 the Hartford Whalers where history. These Whalers were just another casualty in a decade filled with more shuffling of NHL franchises then a card game at the casino. Hartford joined the likes of Quebec, Minnesota, and Winnipeg as cities that lost their beloved franchises to other cities. While hockey has returned to Minnesota and most recently Winnipeg, the fans of the Brass Bonanza are still awaiting for the Whalers to come home.

I guess you could say that the Whalers were just in the wrong place at the wrong time. Victims of a new owner, who never intended on keeping the franchise in Hartford. A state whose Governor who was trying to lure the New England Patriots from Foxboro down to the insurance capital of America. Governor Rowland felt it was more important to try to lure a different team to the state instead of keeping the one it already had. Long story short, the Whalers were moved to Carolina, while Robert Kraft stabbed the whole state in the back when it was revealed that he just used the relocation to Connecticut as  a ploy in order to gain leverage to build Gillette stadium in Foxboro. Now you know why  Connecticut doesn’t have that many Patriots fans.

With the current state of the NHL with teams like Phoenix, New Jersey, Florida, and Dallas struggling to fill their arenas, the next great migration of teams moving might have just commenced. We may look back and say this movement was started by the Thrashers moving to Winnipeg.  The biggest knock on Connecticut is the lack of an NHL arena. The current arena, the XL center, is old and incredibly outdated. A new downtown arena is essential for not just hockey, but for the well-being of the city. A city that desperately needs to revitalize its downtown community.

The UCONN Huskies are without a doubt the biggest draw in Connecticut.  No surprise there, with multiple National Championships the Huskies are a National power that gives us Nutmegers a sense of pride. With the UCONN hockey team entering the fold in 2014 couple with the declining XL center, it’s not if but when a new arena should be built. The goal of this new arena would not be to just bring in an NHL franchise but rather give UCONN a state of the art arena for years to come. This new arena would  bring in more events such as NCAA regional tournaments while bringing money to a state that is cash strapped. Not to mention it could be a major tool to recruit top talent in order for UCONN to continue their dominance on the hardwood. The success of the MTS Centre in Winnipeg proves the arena wouldn’t have to be a colossal arena. A 15,000 seat arena would be a perfect size for both collegiate and  professional teams to fill the seats.

While there are many other roadblocks preventing the Whalers homecoming, such as current teams affairs and television contracts, step one is to build a new arena. Remember Field of Dreams? If you build it they will come ! Money is a big issue with financing this arena but if the state realizes the benefits of the UCONN Huskies athletic programs it makes sense. Sure the ultimate goal is to bring in an NHL team, but it’s a process. The Whalers had one of the most loyal fan bases and left not because of poor fan attendance but because of a miser owner and a governor who gambled on the NFL and lost. Connecticut needs to improve its sports infrastructure for its college basketball

teams. If they build an arena to help UCONN, then the pipe dream of NHL hockey could become a reality. Hartford was the Green Bay of the NHL in America and represented the unique passion  and love that New Englanders have for the game. The NHL experiment in the Southern U.S. has had mixed to terrible results. Now maybe the best time for Gary Bettman to look north, where hockey belongs. With the success of the Whalers winter festival at Rentschler field over a year ago proved that their still is a strong fan base. While critics argue that minor league attendance has been poor in Hartford minor league hockey to the people of this great state is like beer without alcohol. Once you’ve had the real thing anything less  won’t suffice. When the minor league team changed its named to the CT Whale instead of the Wolf Pack season ticket sales increased by 36%. Coincidence? I think not!!!

The Whalers have such a great history and arguably one of the greatest sports logos in history. What I’m saying is that the city of Hartford has the chance to kill two birds with one stone. Not only improve the playing arena for the UCONN Hockey and basketball teams but at least give the state a chance to get a NHL team back. The road ahead is without question going to be a long and hard one to get the NHL back. But if Hartford takes that first step by investing in UCONN, the state’s best asset who knows? Maybe the sounds of the brass bonanza  will echo through downtown Hartford once again. Please fell free to comment and follow my blog. I would love to hear what suggestions you have for me and what you would like me to write about. You a Whalers fan? Would love to hear from you! Like the Whalers? click these links below Thanks !!

8 thoughts on “Bring back the Brass Bonanza!!!!! How Connecticut can get an NHL team back and why they need to”