Umm this looks like a wolf and a generic one. Does Minnesota know about this?

Out with the old and in with the new! The Connecticut Huskies athletic department just got an overhaul. The department felt it had an identity problem, most of the teams had their own individual logos and colors. Uconn felt that it’s teams were too different and that it was causing confusion. In an attempt to bring it all together the Huskies decided to have all their teams have the same colors and a new banner to fight under. However, this may not have been the best idea. Just look at the new so-called “Husky” logo. Tell me that doesn’t look like a wolf? What husky looks like this? Personally, I think they should have stuck with the football block “C” logo instead of this. This is a sad attempt to make Jonathan the Husky “fiercer looking”. Unfortunately, this logo is terrible and appears stolen from either the Timberwolves or some high school. I guess the only good to come out of this extreme makeover college edition is that at least the teams look relatively the same. What do I mean by this? UConn’s problem was that almost all of their teams had their own identity. They each had different logos, some had a husky others didn’t, and different color palates that were all varying. While blue and white remained a constant,  some teams had red or silver as part of their uniforms. No more! Now all the teams will rock red, white, and blue for 2013. One problem, where the heck did the red come from. Personally I preferred just the blue and white, maybe a little silver but I think the red is alt tile much. While most of the uniforms 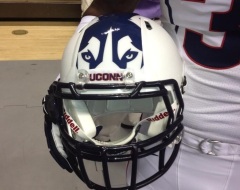 Here’s looking at you punk!

have turned out to be improvements, the two premier teams suffered in the makeover. Basketball’s new uniforms are not much to write home about and was a missed opportunity, but the football team’s are a train wreck. At first glance it looks like a sleek uniform but then you get to the helmet. Enter laughter, dread, or fist palm what ever action suits your need. So the classic C is gone, ok so the new husky will be on the side right? Um no Plain sides, Uconn in script along the back, and the infamous cujo stare on the front. I can just imagine when opponents line up against the Huskies next year what must they be thinking. Thank god I don’t have to interview the football players. Who do I look in the eyes the players or the husky? 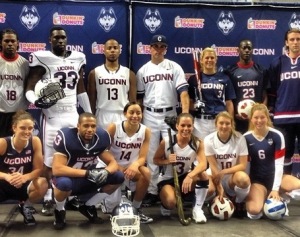 Despite now having the teams now matching, Uconn’s new mascot and overuse of red has left something to be desired

Uconn has at least done one thing right. At least now their teams all match and they didn’t create absolutely  ridiculous looking uniforms, I’m talking to you Maryland. While the uniformity is great, I still believe the boat was missed with the new Husky, overuse of the red accent color, and laughable football helmets.  To see all of the team’s new looks click the (link). I just hope for two things. This mascot won’t last too long and for the love of god don’t make some crazy red alternate uniform. We’re still recovering from those silver atrocities from a few years ago. What do you think of Uconn’s new looks? Did they hit a home run or strike out? Comment below and let me here your opinions and ideas.