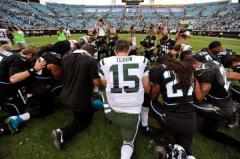 Tebow in Jacksonville just makes too much sense

Tim Tebow. Those two words probably just sparked a debate or instantly made your mind jump to a conclusion about the lightning rod quarterback. For Tebow, there are two schools of thought. The first, is the logical one, which is Tim Tebow can’t play quarterback in the NFL. He’s a glorified running back/fullback whose throws make anyone who can throw a spiral cringe. However, there is the other side of the argument, that he turned around the Broncos season and has won a playoff game. Not to mention proved, that while he does have his warts, when it is crunch time he is a clutch quarterback. Since being released by the New York Jets after what was a tumultuous season, Tebow has not been offered a contract and shunned by prospective NFL teams. Despite the spread option gaining more popularity in the pros, the style of offense Tebow thrives in, teams don’t want to take him in. While people may believe this is because of his particular skill set, it might be what I call the “Tim Tebow effect” on a team. With the world of sports, media such as ESPN, constantly reporting on Tebow, the circus atmosphere that follows

creates a toxic environment for the entire organization. This plagued the Jets last season and has resulted in their complete overhaul this offseason. Ozzie Newsome, the GM of the Baltimore Ravens, had a great quote: “it’s hard enough to win in this league with no distractions, but when you have a major distraction you have no chance”. Teams don’t want to deal with the frenzy that analysts, like Skip Bayless, who all seem to have a love affair with Tebow, constantly bombarding the franchise with questions such as “when are you going to play Tebow”? The perfect place for Tebow to go and have a successful career in the NFL is Jacksonville. It’s his hometown, and he is a beloved sports icon from his glory days with the Gators in the state of Florida. Despite the Jaguars front office constantly stating that they will not go out and sign Tim Tebow, they need to reconsider. Unlike the other 31 teams, the Jaguars games are constantly blacked out as a result of poor attendance, just look at the picture above. They need to generate interest in one of the NFL’s perennial doormat franchises in order to sell more tickets and generate more revenue. Enter Tim Tebow, whose sheer presence in a Jaguars uniform would sell tickets and get fans in the seat. Unlike most teams the Jaguars could use this publicity stunt as they face dropping attendance and relocation rumors. The Jaguars also don’t have a quarterback of the future, I think Blaine Gabbert has proven that. This team isn’t going anywhere fast so why not take a flyer on Tebow? Worst case scenario is that he stinks or is relegated to the sidelines, but people will still buy tickets and Tebow jerseys. Even if it doesn’t turn out well on the grid iron, the Jags still will make a lot of money if Tebow is on the roster. Last year the Jags had one sellout. 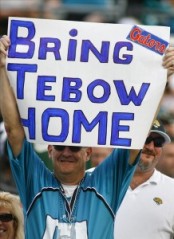 Can you guess which game? It was when the Jets played the Jaguars with Tim Tebow on the sidelines as the backup. They still came to see him even though he would never get into the game. The best case scenario is this. With Tebow they can improve their running game, which will benefit the Jags best player Maurice Jones-Drew. With a running game that allows for their best player to flourish the Jags could be one of the NFL leaders in rushing. With a better run game it can help their mediocre defense by having them on the field for fewer snaps which will keep them fresher and cut down on the mistakes. Do I think if Tebow started all sixteen games that the Jaguars would be a playoff team, no. The division is too talented with both then Colts and Texans at the top, but I can see this team being an 8-8 team. That’s a lot better the 2-14 team we saw last season. Listen Jacksonville, the fans want Tebow, we’ve seen countless petitions and billboards to prove this. This is a franchise that needs money, attention, and a spark that Mr. Tebow can provide instantly. Sure this move will create a buzz in sports media, but seriously when was the last time someone talked about the Jaguars? Tebow in New York was a terrible mistake and a wasted opportunity by the Jets, but in Jacksonville he can become a Florida legend once again. It’s time for “Tebow magic”  in the NFL, when Jacksonville realizes that Tim Tebow is their best option moving forward. Do you think the Jags should sign Tebow? DO you think Tebow will ever play QB in the pros again? Please answer the poll and voice your opinion.