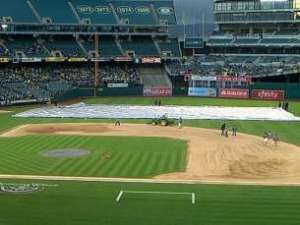 Not a good start

The Oakland Alameda Coliseum has long been considered one of the dumpiest venues in sports, and sunday afternoon did nothing to fix that reputation. After a weekend field with numerous complaints about the field the game between the Mariners are Athletics was cancelled on Sunday because of poor conditions. This isn’t the first time the A’s have had a strange cancellation at their stadium. One time they had to cancel a game because of sewage in the dugouts. Here’s the thing. This isn’t in September after a football game, this isn’t the day after a major concert, so why is the field not ready? They’ve had months to prepare for baseball and can’t even last a week? I’ll tell you one thing. This is defiantly not helping Oakland keep the A’s or Raiders. If no new stadium solutions are found and stuff like this continues to happen, Oakland will lose it’s teams sooner then later. Instead of a field of Dreams in Oakland, it’s only a coliseum of calamity. For the video on the field click (here)